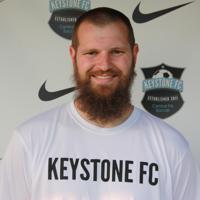 Josh graduated from Messiah College (2007) with a B.S. in Health and Physical Education (K-12).  Josh obtained his M.S. in Health and Human Performance from California University of PA (2012).  Josh is currently working on obtaining a Master's in Athletic Coaching from Ball State University.

Eve Allen Is currently a Physical Education teacher in the East Pennsboro school district.  Eve earned  a bachelor’s degree in Health and Physical Education  at Messiah College, graduating in the Spring of 2017. She began working with the Keystone Kickers (U4 -5) program in the spring of 2015.  She now works as the assistant to the YDP Director of Coaching,  Josh Bull. Prior to this position she has had many opportunities working with children including the Mechanicsburg Parks and Recreation where she was employed as a summer camp leader.
Eve grew up in the Mechanicsburg community and began playing soccer at age 5. She advanced in her soccer career and played for the Mechanicsburg Area Senior High (MASH) Varsity team. During her years at MASH she also earned varsity letters in Tennis and Track and Field.
Working with children is Eve’s passion and she strongly believes that the skills learned at an early age through programs such as these will give them a ‘love for the game’ along with a positive foundation for future success.